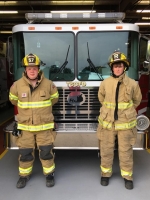 Wednesday September 3, 1913 Taylorsville experienced disaster. About dust a fire broke out in the Reynolds Blacksmith Shop at the present location owned by Steve Goodlett on Main Cross Street; the flames spread towards the square through I.W. Beauchamp’s lumberyards (now planning and zoning offices) to Main Street through Felix Greenwell’s Grocery Store where Red Scooter now stands, east on main continuing through Allen’s hotel almost to Bloomfield Road. The next morning an entirely unrelated fire broke out on the north side of Main Street when a bakery coal oil stove exploded. The bakery stood at the present location of the Florist Shop. Flames spread west and burned a livery stable, the present location of Valley Productions, and east all the way to the town square. The old red brick court house was completely burned. There was no fire department or water system and the only means of firefighting was with buckets of water. All the records of the court house were saved. 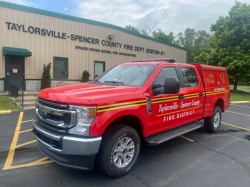 This site has been viewed 583,589 times.
News
Events
Apparatus
Maintained by the members and staff of Taylorsville-Spencer County Fire Protection District. Designated trademarks and brands are the property of their respective owners. Copyright © 2006-2022. YourFirstDue Inc. All Rights Reserved. Content on this web site is supplied by Taylorsville-Spencer County Fire Protection District. YourFirstDue Inc. cannot be held responsible or liable for any content, text, pictures, or any other media found on this web site.
Management login
Powered by